Applications are available online at http://www.womencenterofjax.org/
Women's Center of Jacksonville is a non-profit resource center for women and their families. Our mission is to support and empower women and to nurture mind, body and spirit. Art & Soul is an ongoing series of exhibits by women artists and is designed to provide opportunities for celebrating women's expression and to invite the public to view the work of local women artists.
CALL TO ARTISTS

Art & Soul is accepting submissions from women artists, emerging or professional, working in the Northeast Florida region to participate in "New Beginnings". Works will be selected for a three-month exhibition at the Women's Center of Jacksonville, 5644 Colcord Avenue, Jacksonville, FL 32211
Posted by MHat at 7:19 AM No comments:

FROM QUILTS TO FREEDOM by JCAAA 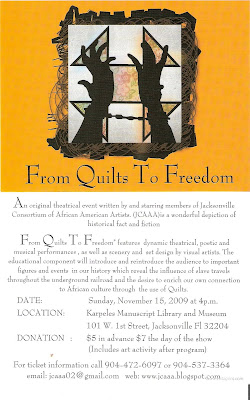 Sunday November 15, 2009
@ 4PM in the Karpeles Manuscript Library
Museum
Click to enlarge.
Posted by MHat at 9:56 PM No comments: 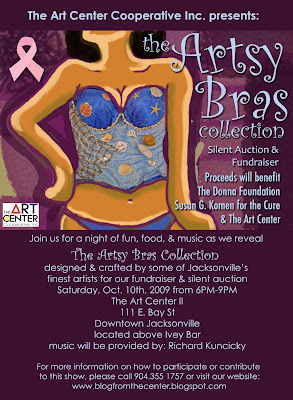 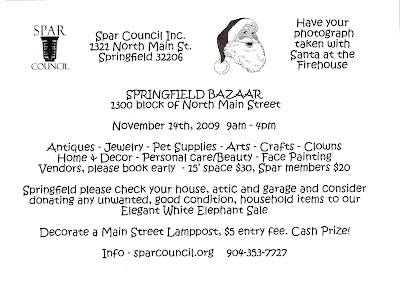 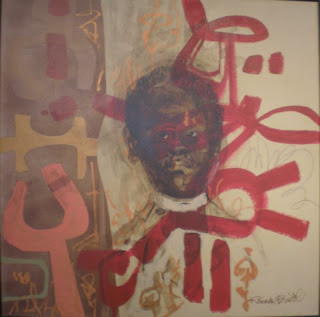 Four Fernandina Artists are in a show called VISUAL RHYTHMS @ First Coast Community Bank ... 1750 S. 14th Street ... Fernandina Beach. FL. The show is up now and will remain up until mid-November. "I am one of the four artists. The show looks good". The Opening Reception will be held on Thursday evening September 17th from 5:30-7:00 P.M. "I would personally LOVE to have JCAAA members present in force". 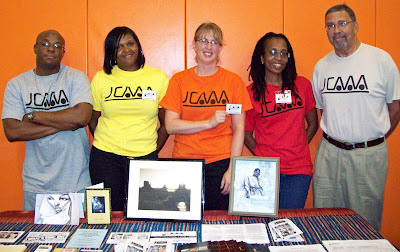 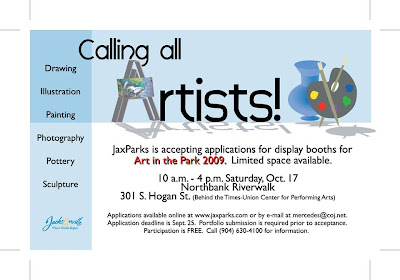 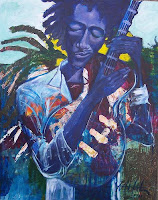 YOU COULD BE THE ARTIST FOR THE 2010 JACKSONVILLE JAZZ FESTIVAL POSTER!
Entry Deadline: September 1, 2009 Mail or e-mail your entry today for a chance to win a cash prize, a complimentary booth at the Art in the Heart juried art show and recognition as the official 2010 Jacksonville Jazz Festival poster artist.

E-mail your entry as a JPEG or PDF file to events@coj.net
Posted by MHat at 6:49 AM No comments: 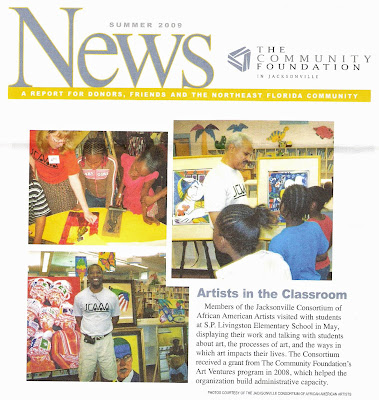 
Renowned Businessman and art collector, Dr. Paul Jones visits Laurence Walden at his home studio in Jacksonville Florida June 20th 2009. Dr. Jones has been accredited with being the largest collector of African American Art in America, so much that the building where George Wallace stood and said that no blacks would enter this college at the University of Alabama, now Houses an African American Art Museum, owned and run by Dr. Jones.
Dr. Jones who has in his collection the "The Changing of the Guard" a tribute to Barack Obama, By Laurence Walden, was intrigued by Walden's ability to recycle sterling silver cutlery combined with other metals and other found objects into decorative Afrocentric Mask. Dr. Jones plans to feature several of these renderings in his museum at the University of Alabama where Walden will also perform as a Jazz Vocalist, After hearing him do a tribute to Billy Eckstine , who was in fact a friend and admire of Dr. Paul Jones.
www.uanews.ua.edu/anews2008/oct08/pauljones101408.htm
Posted by MHat at 4:25 PM No comments:

THROUGH OUR EYES 2009 (Call For Artists)

The Ritz Theatre & LaVilla Museum is seeking proposals from artists of all disciplines for participation in Through Our Eyes 2009 — Each One Teach One: The Artist as Mentor. Now in its 17th year, Through Our Eyes is Jacksonville’s longest running annual exhibit featuring new works by African American artists.

For this exhibition, established artists with a history of exhibition experience will mentor an emerging artist and assist them through the process of producing one work of art for this year’s show. Work produced by each artist can be collaborative or independent, but should in some way reflect the impact of mentorship. In the exhibition, the work of the mentor and mentee will be shown together. The influence of the mentorship can be expressed visually or through written text. Artist/mentors may submit a maximum of five (5) pieces of their own original work for this exhibition. Additionally, exhibiting artists will participate in the development and or implementation of a minimum of one activity in the Each One Teach One Workshop Series. This once monthly art class is designed to provide hands-on visual arts experiences for youth. Other public programs related to this exhibit will include, but are not limited to, the exhibit opening, Art Walk, gallery talks, workshops, artists’ market and other activities to be determined.

Complete and return your application by Tuesday, June 30 2009. Notifications of acceptance will be made by Monday, July 6, 2009.

Art & Soul is now accepting submissions from women artists to participate in "Anything Goes". Works will be selected for a three-month exhibition in the Women's Center at 5644 Colcord Avenue.

We hope your artwork will be a part of this exciting show
This Call for Artists is open to all women artists working in the Southeast region. Entries must be original and be postmarked by June 26th 2009. Incomplete applications and/or materials will not be considered. Applications are available online at www.womenscenterofjax.org, or by calling the Women's Center at 904-722-3000.
Posted by MHat at 2:36 PM No comments: 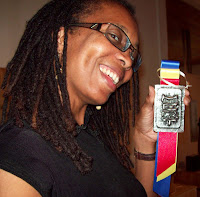 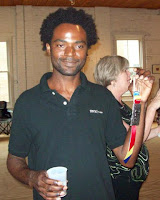 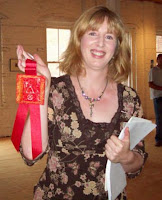 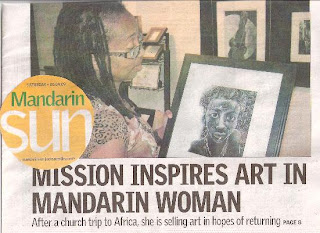 Kibee: School Time 16X20" Mixed media. "This piece was one of three created as a triptic. I used pieces of my own seriagraph images and small examples of my clay work created from molds that I also made. Children are my subject matter. These depicted children are in a learning environment. Children are our future and our children need the village to be in place to insure the quality of their development". Rhonda Bristol
Posted by MHat at 9:59 PM No comments:

ART AS A MISSION 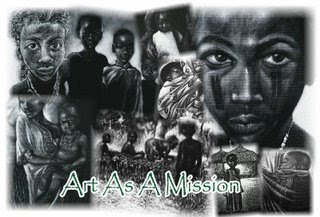 Artist Marsha Hatcher is the featured artist at The Art Center CoOp Gallery for the month of May. Exhibit opens Tuesday May 5th with the opening reception Wednesday May 6th starting at 5:00PM - 9:00PM. The exhibit "Art As A Mission" is a series of African inspired images from the 2007-08 trip to Nigeria. For more info visit http://www.hatcherart.blogspot.com/ look under "SEND ME."

This is a free event where all is welcomed! 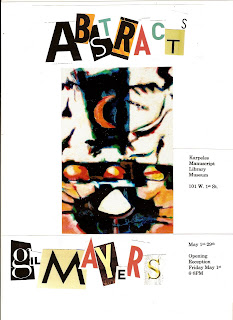 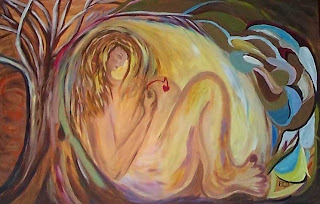 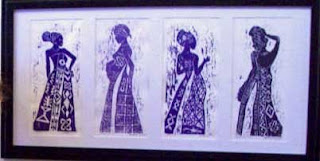 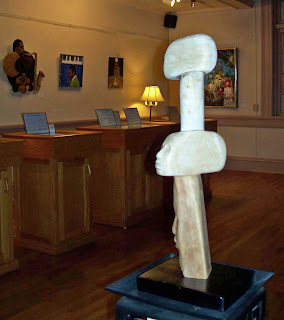 sculpture by Pablo Rivera
Posted by MHat at 7:44 AM No comments: 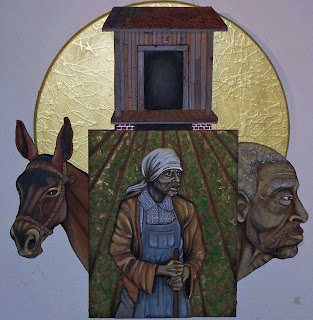 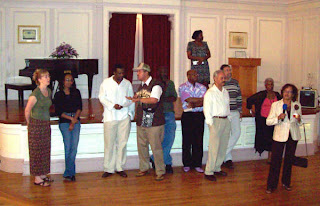 RHONDA AT THE RITZ


Fernandina Beach visual artist Rhonda Bristol will demonstrate how to create African inspired designs using the silkscreen technique with simple stencils and contact paper.
Participants are asked to bring a smooth piece of clean cardboard, (a cereal box works well), a piece of scrap fabric as well as a plain washed light - colored tee shirt with them. School aged children and adults are welcomed. Be prepared, things could get a little messy. If the weather cooperates, this will be held outdoors. R.S.V.P. at (904) 632-5555.
829 North Davis Street Jacksonville, FL 32202 www.ritzlavilla.org
Posted by MHat at 1:35 PM No comments: 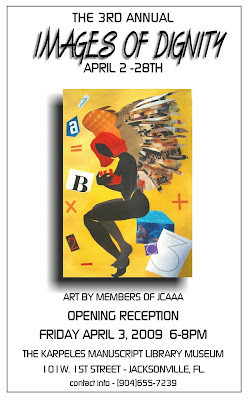 All are welcome
FREE ADMISSION!
Posted by MHat at 1:45 PM No comments:

Pam Barnett, Jelena Gallon and Rhonda Bristol are all associated with the new WORKS OF ART GALLERY. They are having the Grand Opening this Saturday, Feb. 28 from 10 AM - 10 PM.
Drop by take a look. Better yet, buy something!
WORKS OF ART GALLERY is located across the street from BJs in the Baymeadows area.
7999 Phillips Hwy Jacksonville, FL 737-9500
Posted by MHat at 2:03 PM No comments:

Art in the Heart of DowntownArt Show & SaleMay 22-24, 2009 Laura Street Corridor, Downtown Jacksonville A part of the annual Jacksonville Jazz Festival CALLING ALL ARTISTS AND CRAFTSPEOPLE!2009 Art in the Heart Art Show & Sale Application (PDF)
The 2009 Art in the Heart of Downtown art show and sale will feature the work of prize-winning artists and master craftspeople from around the country.Festival patrons will be able to enjoy both the sounds of first-rate jazz performers and browse through the work of talented artists from around the nation.
Mediums include: Clay, Digital, Drawing, Fiber, Furniture, Glass, Jewelry, Mixed Media, Painting, Sculpture and Wood.
Posted by MHat at 3:52 PM No comments:

L. Walden, Gene Hollomon and others will be on Program at the James Weldon Johnson School for College Preparation on the 20th of Feb. Gene will be James Weldon and Lawrence will do his Eckstine Presentation ! "We intend to knock it out for these kids as they are most deserving !" The time will be @ 2:PM and the School is located behind the brand new Gym located on King St. Come on by if you can, have some fun and show the young people that we care ! Gene Hollomon ........(It is past Ed. Waters College).
Posted by MHat at 2:39 PM No comments: 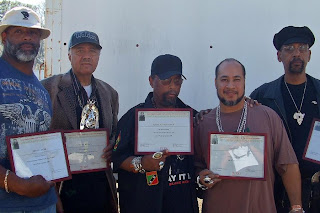 Walden Wins First Place in Mixed Media Catagory
In the Zora Neale Hurston Juried Festival Art Show
Congresswoman Corrine Brown along with others from
Jacksonville visits his booth. Other Highlight of the Festival
for Walden was meeting Dr. Evelyn Bethune,
( Grand daughter of Mary McCloud Bethune, Billy Eckstine was
her favorite singer!) Dr Bethune, will be booking Walden's salute to
Billy Eckstine at Bethune Cookman College in the near future.

The Riverside Arts Market (RAM) is planned to open in April 2009. This huge all-weather market under the canopy of the Fuller Warren Bridge has the potential to be the biggest weekly arts event ever held in Northeast Florida. The RAM Committee has been working for the past year to develop market policies and guidelines, a parking plan, a marketing plan, an agreement with the city, a sponsorship plan and much more.

On Saturday, January 24th, 10am - 11:30am, the RAM Committee will host a workshop for interested artists, food vendors and farmers. The purpose of this workshop is to receive feedback on the market guidelines (including market layout, booth assignment policy and cost structure, Market policies and procedures).

In order for the Market to be successful we need and want your input.

The meeting on the 24th will be held at the First Guaranty Bank Building at 760 Riverside Ave, Jacksonville FL 32204, immediately across the street from the Arts Market site. We will begin promptly at 10am. After the meeting, we will walk over to the Market location so you can take a look and ask questions.

Please RSVP by January 22 to Teresa Fish at teresa@riversideavondale.org if you plan to attend. This will be a great meeting!

Thank you,
RAM Committee
Posted by MHat at 1:51 PM No comments: 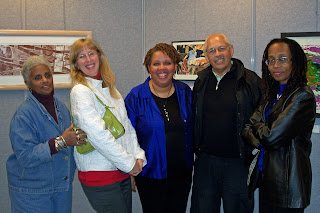 Rhonda Bristol, Annelies Dykgraaf, Pam Barnett, Pablo Rivera, and Marsha Hatcher are the "Cultural Fusion " artists who artwork was selected for this exhibit. This exhibit runs through Feb 16. 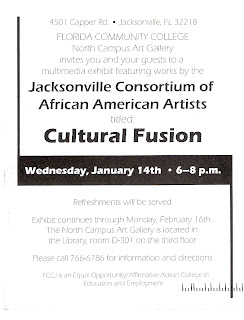 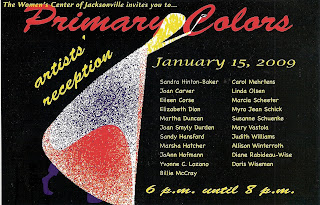 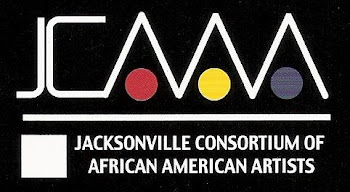